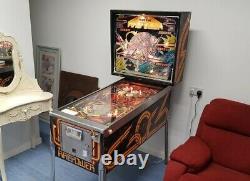 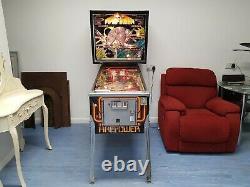 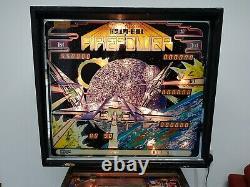 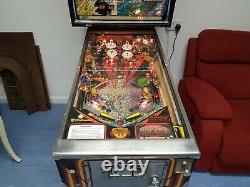 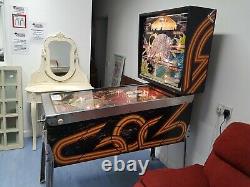 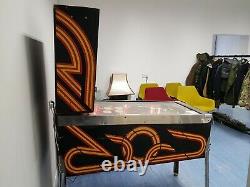 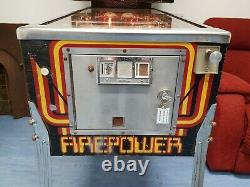 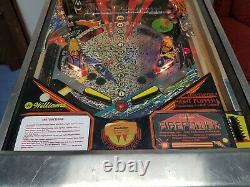 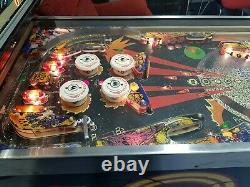 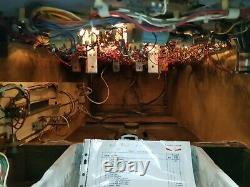 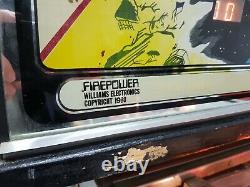 Some peeling on the backglass but still looks amazing. This space-themed pinball machine was first built in 1980 by popular pinball machine maker Williams Electronics. Firepower pinball machine is a first-of-its-kind pin with multiple features that changed the world of pinball gaming as we know it. This was the first pin to ever use a lane change that can be activated by the player by pressing the right flipper button, rather than by the CPU doing it in response to gameplay.

Firepower was also the first game to utilize electronic multi-ball and animated displays. In 1980 these were cutting edge features for the pinball machine world! With all this ground-breaking technology its no surprise the Firepower pinball machine won many industry awards. Work the flipper on the right for maximum scoring!

Just a flick of the wrist will transfer the light and scoring potential from a lit top lane to an unlit lane for an additional skill feature that gives the player extra control in making all 4 top lanes! Wipe out the alien by making 6 center targets! The victory lights 1 or 2 super-charged eject holes and has FIREPOWER report back enemy destroyed! Make all 6 targets a second time and light the second or third eject hole! Then send the ball spinning into a flashing eject hole and its locked up.

While FIREPOWER kicks a new ball into play! Lock up the second ball.

Lock up the third ball. And all 3 balls are fired into play at the same time on the command Fire 1, 2, 3 for 3 timre more excitement, 3 times more scoring power! The memory feature insures each player retains the same number of lucked up balls from turn to turn for the ultimate test of individual skill. At the end of each game, all held balls are kicked out so that the multi-ball feature is completely equalized, from player to player, from game to game.

Increase Spinners value from 100 when unlit to 1000 when lit by knocking out all 6 center targets! Make all 4 top lanes for 2X, 3X, 4X and 5X Bonus Multiplier and light FIRE! Hit 3 side targets and light POWER, the flipper return lanes for 3000 value and 3 bonus advancess! Light FIREPOWER and collect Firepower Bonus worth 10,000, 30,000, 50,000, Special! Make the Special and hear Mission Accomplished!

Arm Yourself with the Ball Saver Shield! Make any bank of 3 targets and activate the Shield on the outside lane that propels the ball back onto the playfield for a longer scoring drive!

FIREPOWER Speaks of Ultimate Test. From the very first words at the start of each game, to you are destroyed if the game is tilted and all other messages of daring and challenge during play the play is urged on with a wild momentum that builds and builds! The item "Williams 1980 FirePower Pinball Machine" is in sale since Monday, November 9, 2020.

This item is in the category "Video Games & Consoles\Coin-Operated Gaming\Pinball Machines". The seller is "vintagebadgerscollectables" and is located in High Wycombe. This item can't be shipped, the buyer must pick up the item.