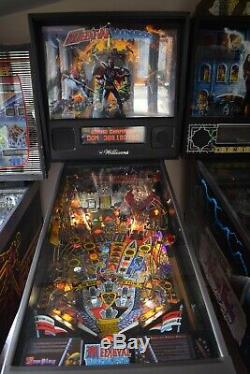 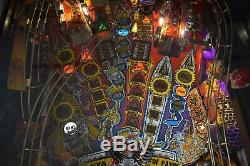 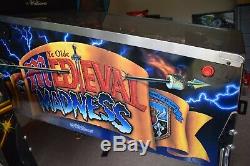 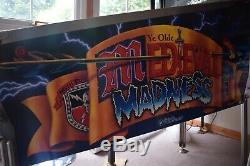 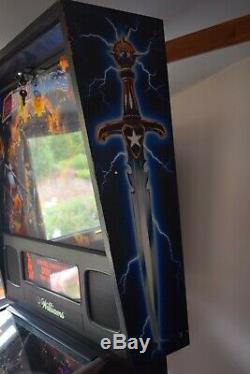 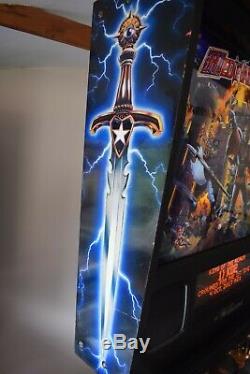 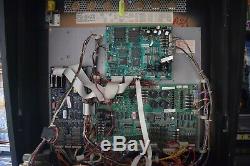 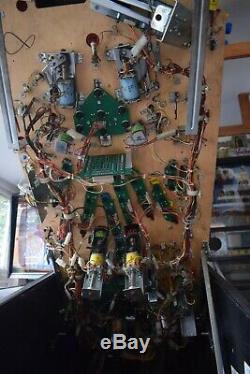 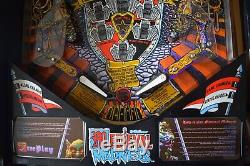 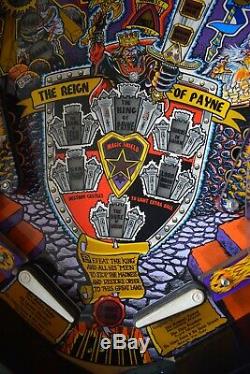 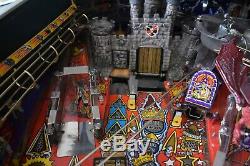 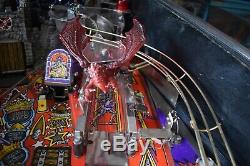 Medieval Madness Pinball Machine, released in 1997, this machine is arguably the best pinball machine ever made and is currently holding first place position in Pinside's Pinball Top 100. It was manufactured by Williams, makers of some of the greatest pinball machines in history, who produced only 4,016 units, making any Medieval Madness models highly sought after. Behold the Renaissance of Pinball! Defeat the King and all his men to stop the Madness and restore order to this great land! - Castle shakes and crumbles when player breaks through drawbridge, gate and into the castle. Defeat the Evil Dragon - To save the damsels in the tower. - Hidden evil trolls pop up for player to defeat. Multiball modes include Raid the Castle, Multi-ball Madness and Battle for the Kingdom. A catapult that propels the ball into a habitrail. 2 pop-up trolls in playfield that become active during Trolls! This is one of the 4,016 original Medieval Madness made by Williams, not one of the remake. So difficult to find nowadays.

This one is in good to very good condition but not in collector's condition. Have a close look at the photos to make your own view on its condition as this is highly subjective. There is a bit of wear on some of the inserts, and on Merlin hole.

I have a metal protector for the Merlin hole (not supplied by Cliffy as he doesn't do one for this hole but made by people he recommended). But i haven't fitted it as it requires lifting items off the playfield which i felt a bit uneasy about. No fault on start-up, strong DMD, strong flippers, no broken ramp, strong catapult, castle working as it should, trolls working fine too, new shiny balls. Best thing to do is to come and have a game to see it for yourself.

The game is at my house near Derby. More photos available on request. Let me know what areas of the game you would like to see in more details. Don't hesitate to get in touch if you need more information and if you want to see it. Pinball machines can be temperamental when being moved.

Cash on collection or bank transfer. The item "Original medieval madness pinball machine" is in sale since Sunday, June 9, 2019. This item is in the category "Video Games & Consoles\Coin-Operated Gaming\Pinball Machines". The seller is "domlouis" and is located in Etwall, Derby.