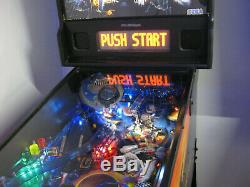 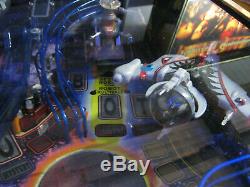 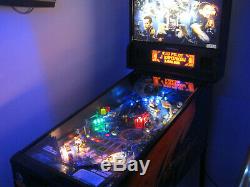 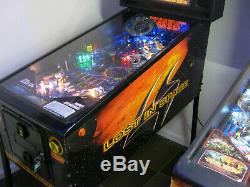 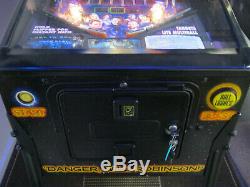 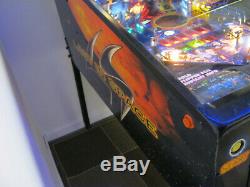 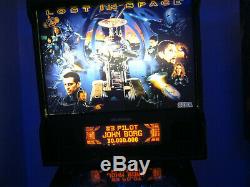 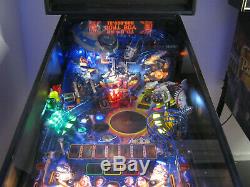 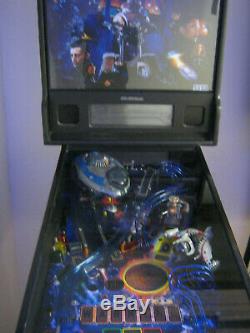 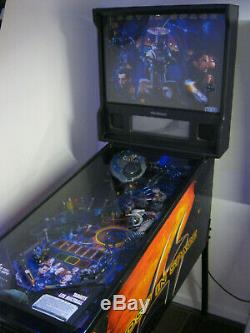 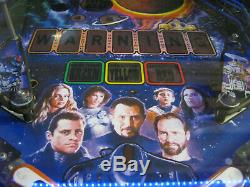 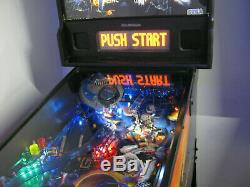 Lost in Space is very much a multiball game. Lost in space also features a spinning magnetic disk that simulates the gravitational field of a gas giant, grabbing and tossing balls. Features detailed replicas of the Jupiter 2, Major Don West's bubble fighter and our favourite robot. To start Robot multiball, you have to shoot the 5 shots with a robot letter to spell Robot. This lights multiball at the robot shot.

Shoot the robot to start. This is a 4-ball multiball in which the object is to spell Warning.

Each lit Robot shot adds a letter to warning and scores 5 M. Completing Warning lights the Robot for unlimited super jackpots of 20M. Warning letters carry over between players and games. Ends when 1 ball remains.

To start Fighter multiball you need to go through the rollover lanes a set number of times. This starts at 5 and increases by 5 for each subsequent multiball. Each lane increases the value of 1 bumper by 10k.

If the spinner lane is lit for super pops, shooting this lane counts as a lane hit. When the required number of rollovers is reached Fighter multiball starts. This is a 4-ball multiball and the object is to shoot the balls back into the bumpers. Each shot to the orbits or the spinner lane awards a jackpot. The jackpot values start at 3M and are increased by bumper hits.

When a jackpot is scored the value resets to 3M. Ends when 1 ball remains in play. To start Condition Red multiball you need to hit the 3 green, yellow and red targets as in High Speed. 3 hits to the green targets scores 5M and lights the yellow targets. 3 hits on the red targets lights the right orbit to start multiball.

The balls are trapped by a magnet and fed to the spinning disk just like the start of canister multiball on Twister. The ramp is lit for jackpots starting at 5M. Lighting all 9 color targets increases the jackpot value by 10M.

Playing all 3 multiballs in a single ball awards a 25M bonus at the end of the ball and an ego award in the high score table. Most rubbers and lamps replaced. & mostly LED on playfield.

Cabinet good condition as seen. As with all machines moving parts and electronics will require maintenance and adjustment over time.

Please follow the link below for it being played. The item "LOST IN SPACE pinball machine SEGA" is in sale since Saturday, December 7, 2019. This item is in the category "Video Games & Consoles\Coin-Operated Gaming\Pinball Machines".blac" and is located in Glasgow, South Lanarkshire.