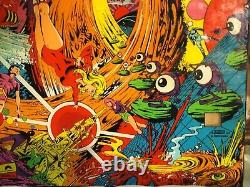 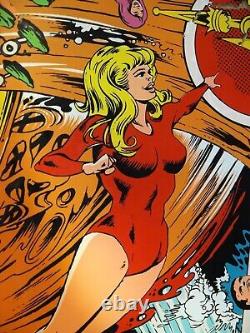 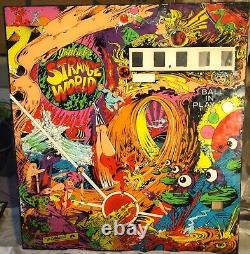 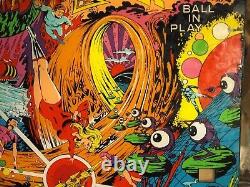 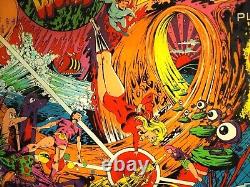 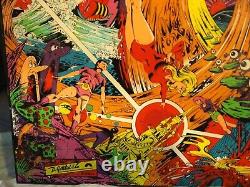 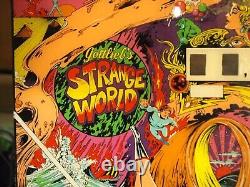 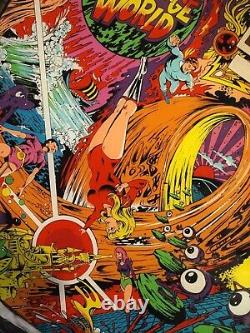 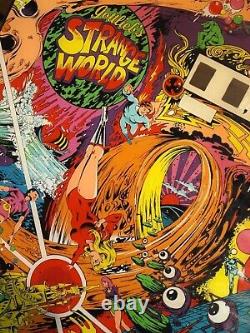 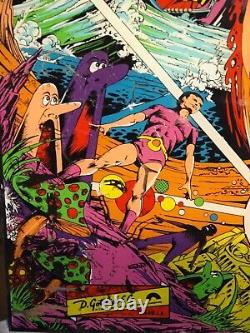 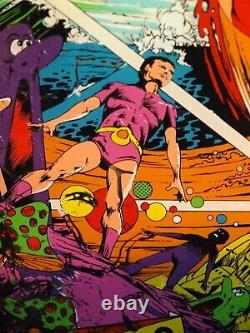 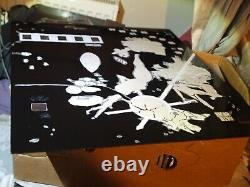 Strange World had a slip up/mistake made during restoration, which messed up the bottom left corner. It can still be corrected but would require a lot more work scraping back and repairing small areas. The backglass restore was put on hold a couple of years ago and is still awaiting further action, but is a low priority on my to do list. Finishing it off as a wall hanger would be very easy, but it was being restored to put back in a machine for which it requires more careful and time consuming effort. It's an original, one of only 675 made.

Might only be 50 or so left in the world, if that. Photos both front and back, are in it's current state. Bottom left hand corner where the mushrooms are was not sealed properly when black backing lacquer was applied, and the black lacquer has bled through into the colour regions in places. To a casual observer, they would probably not notice. But to correct the imperfection, would now require careful removing of both lacquer and colour ink in places with a scalpel, repainting the exact original image from a photo. There is a technique for doing this using a bright light from the front to see which ink to remove. Then painting corrected image on the front of the glass. Copying the image on the front to the reverse, again using a bright light from the front. Then wiping the image off the front of the glass. Then resealing with black laquer on the back.

This is done one small patch at a time, and repeating wherever necessary. There are other small patches that have been left unrestored because it hasn't been decided if it's to be a wall hanger or restored to be put back in a machine.

If its to be put back in a machine then certain areas have to be left translucent, and only translucent paint used on those areas. It is a tricky process to get translucent paint to not look patchy. Restoring to hang on a wall is easy and can achieve near perfect result, but it would never be translucent again. I found 14 current photos, but can only attach 12 here. The glass has been in storage for the past 4 years since photos were taken, its the first time i've looked at the photos for 4 years. And in my opinion, it's one of the best looking pinball Art glasses ever made. This item is in the category "Video Games & Consoles\Coin-Operated Gaming\Pinball Machines". The seller is "*enterprise-ncc-1701*" and is located in this country: GB. This item can be shipped to United Kingdom.