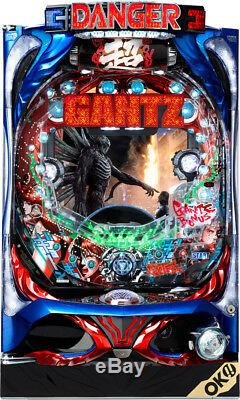 Up for sale Direct from the Ginza Strip in Japan. The NEWEST 2017 Pachinko Machine to hit the USA Soil! Just released January 2017 we have it IN STOCK AND READY TO GO!!

Nationwide release of a new pachinko machine from OK!! GANTZ is a popular comic series by Hiroya Oku that ran in Weekly Young Jump. (Shueisha) from 2000 to 2013. The cumulative number of comics circulated has exceeded 21.

Million (as of September 2016). The series has gained strong popularity due to its world view. Portraying a courageous desperate struggle between people who should have died and. Mysterious people from outer space and the appearance of highly individual characters. A novelization, animations series and games have previously been developed based.

GANTZ and in 2011, a live-action film adaptation of the series with an amazing cast of. Actors became a topic of interest.

This popular content is creating many fans with a variety of. Adaptations for different type of media, including the release of GANTZ: O, a full 3D CG. Animation movie, in October this year. The new machine Pachinko GANTZ recreates all of the footage, gimmicks and gameplay. So that players can enjoy the world view of GANTZ.

Multifarious gimmicks that symbolize GANTZ: The game is brought together with. Multifarious gimmicks portraying the world view of the original such as the mysterious. Black sphere that is GANTZ and the various beam guns required for battles with the. Transmission and scoring following the story: With battle scenes with people from. Outer space starting with transmission and bonanza round numbers determined by.

Scoring after victory, the original story has been fused with the pachinko game. Clear game flow aiming for 100 points: When 100 points are obtained with scoring, the.

Player enters a Super GANTZ BONUS with EXTRA so that the player can experience. The joy and excitement of victory. In addition, with beautiful 3D CG footage the world view of GANTZ can be truly. Experienced the more one plays the pachinko machine. Pachinko GANTZ is not only for pachinko and pachislot enthusiasts but a wide range of people, including comics.

Have the bragging rights - As of right now this IS the second of just a few GANTZ CR Pachinko machines to make to the USA! It's a piece of heaven ready to add to your game room! Again this is IN STOCK NOW!! Come on over and play a round with us - you'll take it home we guarantee it! Yes, we've got them.

The HOTTEST little known game from the other side of the world. In a nutshell: Gambling is Illegal in Japan.

After WWII, someone figured out how to bypass that rule with these Vertical Pinball games. Apparently laws in Japan require Pachinko Machines to be replaced every year so what to do with all these perfectly good entertainment devices??

Unfortunately that R2 was a custom job but we've seen some really talented work from collectors over at the RPF , maybe someone will design a case for us? OK's series of GANTZ pachinko machines exclusively for the Japanese market where pachinko parlors are very popular.

This machine feature a multiple automatic robotic effects: A pop-up Animatronic GANTZalien ORB Pull down & pop out spinning light ball that adds entertainment & fun to the HUGE 16 main LCD HIGH DEFINITION PLAY FIELD The digital display that plays Real Filmed & Animated footage from the Original GANTZ Anime Series. The Game is quite simple, almost like a vertical Pinball Machine... Load up the machine and front hopper with balls. A quick turn of the handle causes to balls to be fired one at a time up to the top of the machine. They then cascade down though various gates, pins, gears & wheels accumulating points (& thus more balls) for you. Depending on how far you turn the handle changes the force and the aim of the balls. The primary goal is to aim for the "Start Gate" which start the bottom center wheels spinning and depending on what 3 images appear, move you up the levels. Change levels and short movies run on the main screen. Various Cut-Scenes and music play at different points during play along with anamatronics all around the screen! It's a total immersion in game from the start. GANTZ comes to life on a beautiful 16 inch LCD display with actual film clip animation and crisp audio theme tracks.

WE ARE fully Authorized by for Everything we sell. The item "GANTZ Pachinko Machine Japanese Slot Pinball Anime" is in sale since Friday, November 16, 2018. This item is in the category "Collectibles\Arcade, Jukeboxes & Pinball\Pachinko". The seller is "billanddeb" and is located in Monroe, Connecticut.