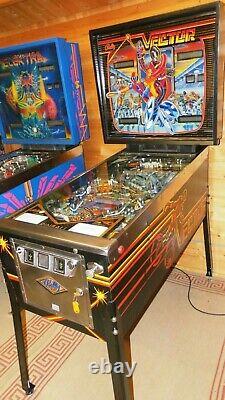 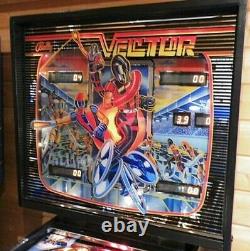 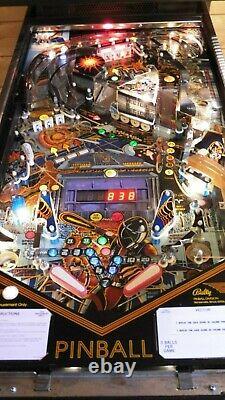 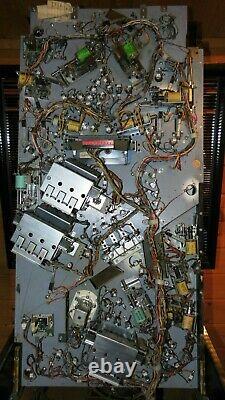 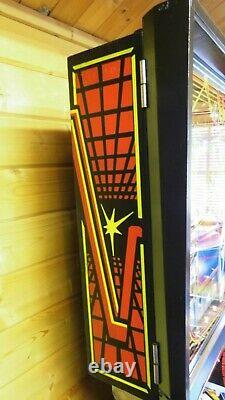 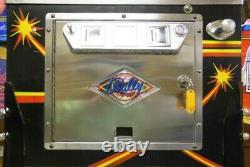 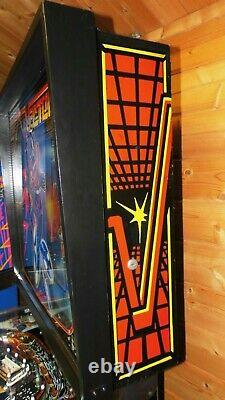 In 1982, following on from their three-level masterpiece, Elektra, Bally released another multi-level game with multiball. This time it was the double level game, Vector, designed by Greg Kmiec.

Taking a fantasy sport as its theme, Vector uses multiple drop targets or'defenders' to block shots to the left ramp, via which balls can ultimately be captured on the upper playfield for multiball. The player then has the option of releasing a locked ball by completing the H-Y-P-E targets or can carry on with a strategy aimed at locking all three balls for three ball multiball. The speed of shots to the left ramp is measured and displayed in the centre of the main playfield, as is the fastest shot to date. The upper playfield, which can be accessed in multiple ways, also has its own flipper and pop bumper, which can be used to try to knock down a further bank of three X-Y-Z drop targets for additional scoring opportunities.

In addition to the three ball lock saucers on the upper playfield, Vector has two more saucers incorporated into an unusual inlane/outlane arrangement to either side of the main flippers. This makes for some interesting ball save possibilities, and the right side saucer also allows the Vector bonus to be collected. It appears that Vector was originally rushed into production such that the game code was not entirely finished on release. This meant that a number of features were not implemented such as the skill shot, and several speech calls were not used. A few years ago a new version of the code (version 4) was produced aimed at implementing these missing items and fixing a few problems. This particular machine is running that code, which makes for a more interesting and satisfying game play experience overall. It should be noted that free play is not available when running this newer code even with a new Alltek mpu board fitted. You simply open the coin door and manually trigger a coin switch, which I have set to add 12 credits per activation to the machine. You can add up to 40 credits maximum at any one time - plenty for an hour or two of play before needing to add more credits.

I regard Vector as an essential part of my pinball machine collection. This particular machine has been the subject of a substantial restoration involving many hours of work. The upper side of the playfields was stripped down and cleaned with all bulbs and rubbers being renewed. I was fortunate enough to talk to designer Greg Kmiec in Chicago some years back, and he confirmed that Vector as designed was supposed to have a smaller flipper on the upper playfield.

I reinstated this instead of the larger one as fitted to many production machines. Some Vectors were fitted with mylar to prevent playfield wear, but many were not as is the case with this machine.

It is therefore common to find Vectors with worn playfields, but any worn artwork in this machine has been sympathetically and carefully filled and restored, including some of the area above the main flippers, which I think it is now hard to believe is not entirely original. The underside of the playfield was also stripped down and the mechanisms cleaned, repaired or renewed as necessary. All of the drop targets were removed and the mechanisms cleaned before their artwork was carefully reinstated. All of the playfield switch capacitors were renewed and new slingshot switches were fitted. The four flippers were disassembled and any worn parts replaced.

All of the below playfield lamps were replaced and their inserts cleaned. The sound board was rebuilt with new electrolytic capacitors and volume pots being fitted. Many of the connectors and header pins to the boards were renewed, and the 5 volts smoothing capacitor on the solenoid board was replaced to enhanced the stability of the supply to the mpu board. Following this any remaining faults were resolved and faulty components replaced.

The cabinet was in decent condition for its age but some scuffs and gouges were evident. Ollowing cleaning of the cabinet, t. Hese were substantially eradicated before several coats of high quality satin lacquer were applied to seal the cabinet surface. The legs were repainted in the correct gloss black for this machine, and new leg levellers were fitted. Vector has a beautiful, mirrored'infinity' back glass with chaser lights around its perimeter. This is achieved using two layers of glass each with screened artwork. Both of these glasses are in excellent condition here with no discernible delamination. Together with the many chrome ramps and fittings on the playfield, this makes Vector a classy machine to have in your home or games room. In summary this is not a project machine but one that is better suited to sitting in a home, private bar, games room or man cave. Pinball machines are complex and even new machines are known to develop faults out of the box, let alone one that is almost 40 years old. That said they are wonderful things to own and play, and there is satisfaction to be had from correcting faults so long as it doesn't take over from playing a game.

For non-mainland addresses you will need to arrange your own transport and paperwork as necessary. In any event the game will be well wrapped for transportation. The item "Bally VECTOR Pinball Machine. In beautiful restored condition, fully working" is in sale since Monday, June 14, 2021.

This item is in the category "Video Games & Consoles\Coin-Operated Gaming\Pinball Machines". The seller is "flaxman_low" and is located in Kingswinford. This item can be shipped to United Kingdom.