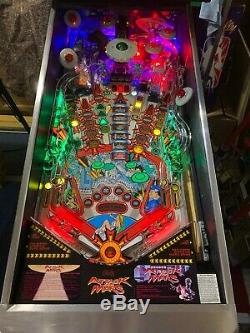 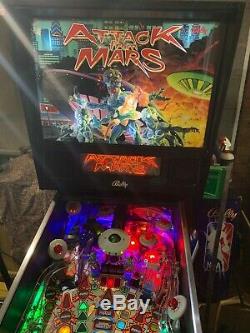 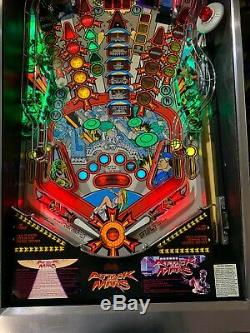 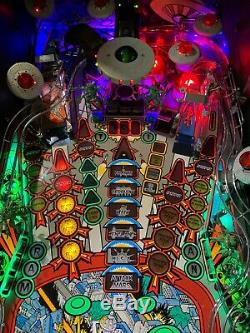 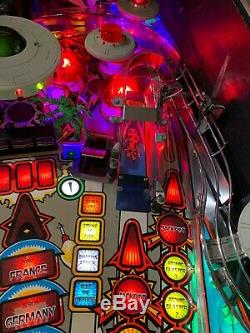 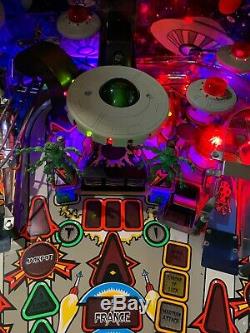 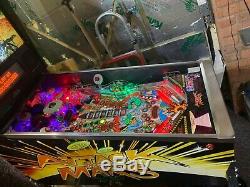 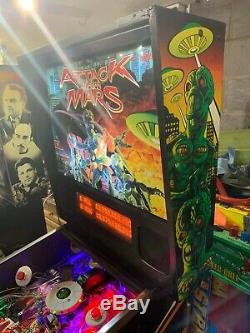 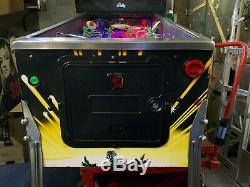 Attack from Mars pinball machine in good condition, original Bally version complete with Bill Ung saucer kit and Martians with light up LED eyes. Fully working with no errors, good display and strong flippers. Game folds down for transport and will fit in some estate cars or a small van - rough dimensions folded 54" long, 30" wide and 31 high. In this game, Martians began to invade the Earth, and its up to the player to destroy the Martian fleet, save all the major cities, and then head off to Mars to destroy the Martian empire and conquer Mars. Among the games noted features include four dancing Martian figures and a strobe light (for Strobe Multiball). Super Jets: You have to score a certain amount of hits on the pop bumpers to light Super Jets (worth 3 million points per hit). 5-Way Combo: During regular gameplay, you have to make consecutive shots at any lit loops or ramps to score a combo, before the lights go out. Super Jackpot: During regular multiball, score all five jackpot shots with at least two balls in play to light the Super Jackpot, which continusly roves at any of the five jackpot shots. Martian Multiball: Successfully kill all four Martians during Martian Attack, and a second ball is launched into play for Martian Multiball. Total Annihilation: Clear the left and right loops, as well as the left and right ramps, for Total Annihilation Multiball, a four-ball multiball. Conquer Mars: Defend all the major cities, and then you head off to Mars to confront the Martian Empire. When all six of these objectives are met, shoot the Stroke of Luck scoop to start Rule the Universe, a four-ball wizard mode. In this mode, everything is lit, and the objective is to score 5 billion points with at least two balls in play, and if you succeed, you will score an extra 5 billion points. Attack from Mars pinball machine is a 1995 game designed by Brian Eddy, and released by Midway (under the Bally label).

The item "Attack From Mars Pinball Machine" is in sale since Monday, February 17, 2020. This item is in the category "Video Games & Consoles\Coin-Operated Gaming\Pinball Machines".

The seller is "mufcmufc" and is located in Uttoxeter. This item can't be shipped, the buyer must pick up the item.